Two weeks ago, I introduced you to iCARE, and last week, I shared how this initiative has helped to unite our school community. In this final post, I will explore how iCARE has changed the way we work with our most difficult students.

In 2014, I inherited a unique sophomore class. Within the class there was a particular group of sophomores who were regarded as a notable challenge and needed a lot of TLC. As I got to know them, I realized that only a few of them were truly challenging and the rest were just looking to carve new titles for themselves among their peers. I hadn’t realized it yet, but iCARE was to become a saving factor for many of them and their sophomore academic and social careers. END_OF_DOCUMENT_TOKEN_TO_BE_REPLACED

What does it mean to be life ready, and how can schools prepare students? END_OF_DOCUMENT_TOKEN_TO_BE_REPLACED

A few years ago, I found myself trying to convince my son that he needed to “play the game” of school and figure out how to rack up as many “points” as possible in order to succeed. As these “encouraging” words came from my mouth, I stopped and asked myself, how was it that any of my students—let alone my very own son—needed artificial motivation to feel inspired about school? At that moment, I came to an important realization: END_OF_DOCUMENT_TOKEN_TO_BE_REPLACED

I was recently cleaning out my inbox and came across this email sent from me to me at three minutes past midnight. This isn’t necessarily odd as I send myself emails all the time of things I need to do or want to remember. However, I have no context for this email—the body of the email was blank. What was I watching or reading that I felt compelled enough to send these seven words? What was it that resonated with me at the time? As I ponder and reflect upon these words, I wonder when was the last time I was truly a beginner again. END_OF_DOCUMENT_TOKEN_TO_BE_REPLACED

Top teachers say that poverty is the most important barrier facing them in their classrooms. Reformers insist that those teachers are merely making excuses for poor achievement of low-income students.

Having worked in and with many high-poverty schools I am, on the one hand, discouraged by the current fad du jour of ignoring poverty as a detractor, and on the other hand, inspired by the fact that I know that, if schools do the right things, the right way, long enough, their students can achieve at high levels. Every day, we learn that more and more schools are beating the odds.

While the mantra of education reformers continues to be ‘No excuses, because poverty is not destiny,’ researchers and practitioners know that “socio-economic circumstance matters to education outcomes.”

Blaming Only Hurts Those Most In Need END_OF_DOCUMENT_TOKEN_TO_BE_REPLACED

Note: This is an update of an article originally posted on June 3, 2014

Increased accountability coupled with new, more rigorous standards and more challenging assessments place increased pressure on principals to improve classroom instruction. Maximizing instructional time is a key way to raise student achievement. Teacher absenteeism and the use of substitute teachers, which reduce instructional time, have long been problems faced by every school. Faced with budget shortfalls, many districts have resorted to removing teachers from classrooms during the school day in order to attend professional development sessions. Labor agreements have been structured in a way that encourages teacher absence. States have reduced the number of school days in a school year.

While principals often face district and state policies that actually encourage teacher absenteeism, principals can impact teacher attendance. Like every school problem, the long-term solution lies in the culture—attitudes, beliefs, mindsets, expectations, and relationships—of the school.

In Teacher Absence, Leading Indicators, and Trust, Raegen Miller made some important points regarding teacher attendance pointing to the need to look more closely at school culture:

Here is the reality. When teachers are absent, students lose valuable instructional time. No matter how qualified they are, substitute teachers do not improve student achievement. “When I was absent I knew that my classes would regress no matter who was the substitute or how well I planned.” – Stuart A. Singer, Author of The Algebra Miracle

A recent study indicates that teacher attendance is an overlooked factor in improving student achievement. “Given the time and attention spent on school programs, new curriculum and strategies to strengthen teacher quality,” the report’s authors wrote, “we may be overlooking one of the most basic, solvable and cost effective reasons why schools may fail to make education progress.”

The study goes on to point out the following:

A study by the Columbia University School of Business offers some interesting findings:

I received a call from the district’s Assistant Superintendent for Human Resources. He was calling to arrange a time for his staff to visit our high school. Unbeknownst to me, our school had the highest rate of substitute coverage for absent teachers in a district of approximately 270 schools.

In our school, when a teacher was absent, we had substitute coverage approximately 96% of the time. I was shocked to learn that other high schools averaged 65% coverage. In addition, our school had the highest teacher attendance among the almost 30 high schools in the district.

This came as a shock to the district staff because END_OF_DOCUMENT_TOKEN_TO_BE_REPLACED

Great schools can be average in some areas, but great schools cannot have a glaring weakness and be considered great. Great schools find a way to solve the problems that stifle or debilitate good schools. Teacher absenteeism and substitute teachers are problems faced by every school. Like every school, the solution is in the culture—attitudes, beliefs, mindsets, expectations, and relationships—of the entire school. END_OF_DOCUMENT_TOKEN_TO_BE_REPLACED

“Pixar magic,” is a phrase film critics frequently employ to describe the studio’s impressive track record of box office success–all 14 of its movies have debuted in the top spot at the box office.

In a recent interview, Pixar co-founder, Ed Catmull, discusses his new book, Creativity Inc. , and says ‘reframing the concept of failure is the only sure way to find success.’

The keys to Pixar’s Succcess:

“I have two daughters who go to this school and I am thrilled that they do. This faculty approaches education like a laboratory experiment. They try out a hypothesis and then collect the data. If it works, they study it more and try to find ways to make it work better. If it doesn‘t, they try to find out why it failed and either remove it or repair it. It is a never-ending process of evaluation and reevaluation, just as you would if you were trying to perfect any product in a lab.”

o   There is no failure, only feedback!

o   As long as you are learning, you are succeeding!

o   The only way to fail in this school is to stop trying, to quit.

o   We learn from mistakes.

o   Each failure only brings us closer to a solution.

o   “If you don’t make mistakes you’re either copying yourself or copying someone else.”

o   Feedback is the breakfast of champions!

Create a Culture That Protects the New

At Pixar, Catmull emphasizes “we are willing to adjust our goals as we learn, striving to get it right, not necessarily to get it right the first time. Because that, to my mind, is the only way to establish something else that is essential to creativity: a culture that protects the new.”

In our school, students would say, “in this school it is hard to fail, because the teachers never give up on you. They won’t let you fail!” I would not hesitate to choose a school whose staff had a growth mindset over a school with a highly-qualified teaching staff. 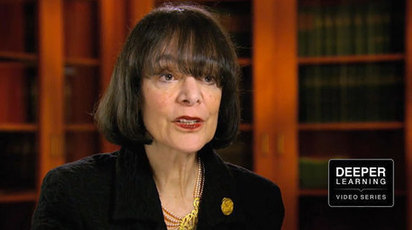 When students have a growth mindset they are motivated to learn. Watch as psychologist Carol Dweck describes the growth mindset and ways to nurture it. Ms. Dweck references the Envision Education videos on Deeper Learning.

Key Points from the Video: 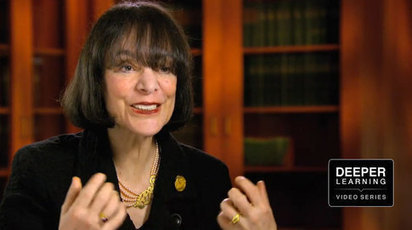 Students who embrace struggle while learning and solving problems develop skills that others may not. Learn how Expeditionary Learning has incorporated struggle and the growth mindset into their school.

Key Points from the Video: