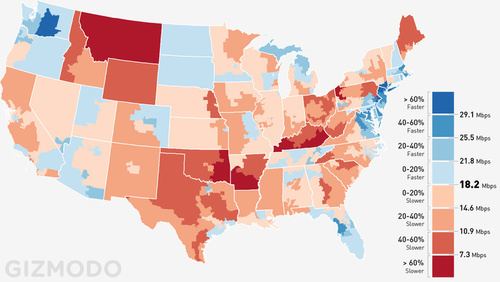 In an interview this February, Susan Crawford–former special assistant to President Obama for science, technology and innovation–summed up the state of America’s slow, expensive internet thusly:

According to the report, “the rich are getting gouged, the poor are very often left out, and this means that we’re creating, yet again, two Americas, and deepening inequality through this communications inequality.”

As the map below illustrates, the more money you live around, the faster the internet speeds.

Whole states like Oklahoma are unable to participate in computerized Common Core assessments because only 15% of the schools have the hardware and infrastructure needed.

Schools and school leaders are valiantly trying to educate students to live in the second decade of the 21st Century with 20th Century technology and resources.